Mark Twain had an extensive library. As an avid reader he collected books of all shapes and sizes, subjects and specialties. He would spend his time reading, and commenting. Most of his books have handwritten comments in the margins (marginalia) and we here at the Twain House have spent some time going through and documenting this marginalia. Not only is this cool because this is Mark Twain's ACTUAL handwriting we're looking at, but also because these are never before seen or published or talked about Twain quotes and thoughts. Who better to share with never before seen quotes than with all of you Twainiacs? You're welcome. :)

For instance, did you know that Mark Twain used the word "dude"? You wouldn't think that 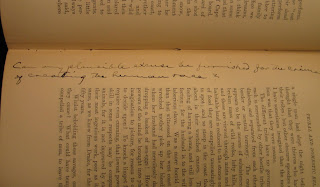 Mark Twain would have been the dude type, but he did use the term. In his marginalia in More Tramps Abroad he writes, "Oh throw this dude out" at one point. And of course he would have argued with authors and disagreed with sections of books and contributed his own opinion. For instance, in The Voyage of the HMS Beagle Round the World by Darwin, he writes in one of the margins, "Can any plausible excuse be furnished for the crime of creating the human race?". And not only would be disagree and 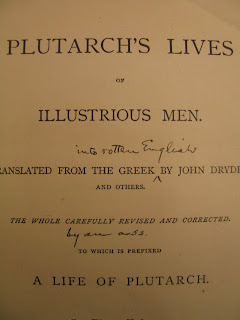 comment on the text, but he would comment on the authors themselves! Perhaps my favorite, and what best represents how Twain could be cruel and blunt, is his marginalia on the title page for Plutarch's Lives of Illustrious Men. Originally written in Greek and then translated by one John Dreydon (and others) Twain writes (words from the text in black, Twain's comments in red): "Translated from the Greek into rotten English by John Dreydon and others... The Whole Carefully Revised and Connected by an ass." How could you get any more Twain than that? 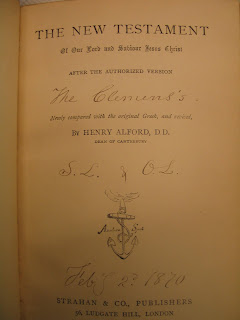 On a nicer note, we also have the Bible that Same and Livy used for their wedding. And on the first page are their initials, "SL & OL" - Samuel Langhorne & Olivia Louise, plus the date, February 2, 1870. There are also passages outlined within the Bible that potentially may have been read at the wedding itself, but there is no marginalia to prove that for us.

We're only a fraction of the way through the Twain books that we own and we're excited to make it through the rest of them. You can be sure I'll be sharing more Twain marginalia with you as we decipher and copy over his quotes.

"I have been studying the traits and dispositions of the "lower animals" (so-called) and contrasting them with the traits and dispositions of man...it obliges me to renounce my allegiance to the Darwinian theory of the Ascent of Man from the Lower Animals; since it now seems plain to me that the theory ought to be vacated in favor of a new and truer one, this new and truer one to be named the Descent of Man from the Higher Animals."
Posted by The Mark Twain House & Museum at 2:27 PM

Down in Redding we have 'Marginalia' too. 300 books remain from the several thousands Clemens originally donated to the Mark Twain Library. A good number of them contain notes Clemens wrote himself, some of them are critical, some offer praise, others are simply a glimpse of a man who seems to have realized he was a legend in his own time & that others would be reading his notes at some point in the future.

In the link below you will see a self portrait and a note that reads: "To Jean Clemens with her Father's love. Sept. 1903"

And I’m hardly surprised that Twain had little patience for Dryden.

There's a the little hill a few miles outside of the town of Sonora California on Highway 49 and on top of that little Hill is the one room cabin where Mark Twain lived for a time and where he wrote the Celebrated Jumping Frog of Calaveras County. I would recommend a visit to this serene spot for anyone who loves Mark Twain...

It is better to think about it to provide a better opportunity and really have to put in good patience and energy.
فروشگاه اينترنتی
https://www.baneh.com
goodluck