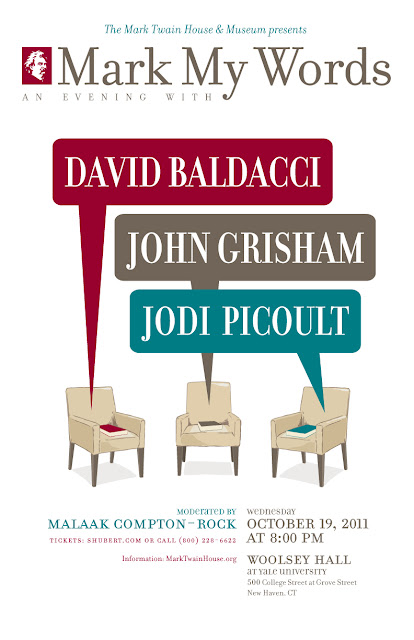 ON SALE TODAY!
CLICK HERE FOR TICKETS!
Posted by The Mark Twain House & Museum at 11:43 AM No comments:

Let us guess that whenever we read a sentence & like it, we unconsciously store it away in our model-chamber; & it goes, with the myriad of its fellows, to the building, brick by brick, of the eventual edifice which we call our style.
- Letter to George Bainton, 15 Oct 1888; (first printed in The Art of Authorship: Literary Reminiscences, Methods of Work, and Advice to Young Beginners, Personally Contributed by Leading Authors of the Day. Compiled and Edited by George Bainton. New York: D. Appleton and Company, 1890, pp. 85-88.)

Last Thursday, your intrepid blogger boarded an Amtrak train from Hartford to Washington, DC, for an annual writers’ conference. I registered for the conference with the intention of gathering ideas for The Mark Twain House & Museum’s own burgeoning writing program, and gather ideas I did!

The AWP (Association of Writers and Writing Programs) Conference is, I believe, the largest conference of its kind in the world. Each year a flurry of writers, editors, agents, literary magazines, small presses, big presses, MFA programs, and world-famous authors descend on a fantastic American city and swap knowledge. For example, I went to panels on The Future of Literary Criticism and How to Start a Successful Literary Center, and sat around at lunch tables with the director of a writing program in California as well as a poet who edits a great literary journal. Jhumpa Lahiri and Junot Diaz read from their latest works, and it took me four hours to properly peruse the new books fair. Through it all I rained down Mark Twain House brochures and spoke about our man Sam to all kinds of people who love writing.

It was, at moments, strange to be representing an author one hundred years dead at the same moment that a twenty-two-year-old writing hopeful tentatively picked up a pamphlet from another table. Not a single other writer’s house was there (although the website Writers’ Houses was, as well as the first stages of the American Writers Museum), and yet I felt that we were certainly a part of the action. Writers babbled about their love of Huck Finn and their passionate responses to the censorship controversy earlier this month. Small presses peppered me with questions about the autobiography.

One of our long-term goals here at the Twain House is to carry Twain’s legacy into the future by encouraging those around us to write as he did: write well, write often, write passionately. To that end we have begun offering writing workshops as well as an avalanche of speakers and lecturers that carry on Twain’s writing legacy today. We’ve started a separate blog, too, that you should follow just so you can check in with the work that’s being produced here. You can also sign up for a class yourself (spots still open!) and please stay tuned for announcements on writers’ getaway weekends and other unique programs.

We love Twain for his masterful use of words, and for his commitment to putting his thoughts down on paper. Feel connected to this great American author, this great humorist, this great cultural observer. Write something today.

For Samuel Clemens, the years he lived in were the happiest of his life.  His time here was not always an idyll, but he built a breathtaking home that symbolized his success and filled it with a loving wife and three cherished daughters.  The years he was in residence saw the creation of his greatest works.  Tragedy, of course, visited him from time to time with the death of his son Langdon and his failed business investments, but overall his time in was fairly Edenic. 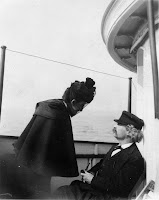 In 1891, due to mounting debts, the Clemens Family left the house. The family departed for to begin a lecture tour that was to last one year.  As their European sojourn stretched to four years, the family returned for a respite in .  In 1895, commencing a round-the-world lecture tour that would ultimate culminate in the book Following the Equator, Sam, his wife Livy and their middle daughter Clara set sail for Hawaii, New Zealand, Australia and India. Daughters Susy and Jean stayed with family in upstate with the intention of rejoining their family in at the conclusion of the tour.  As is well known, on a visit to , Susy contracted bacterial meningitis and died in the house in 1896, just as Livy and Clara were crossing across the to be by her side.  The loss of Susy was a crushing blow and the family never again lived in the home.  In a sense, they were cast from their .
In 1893, during the family’s itinerant wanderings, Twain undertook writing a light burlesque of the Book of Genesis’s creation story.  Extracts from Adam’s Diary is a non-religious take on the first man’s time in and out of the Garden of Eden.  A humorous and cranky look at how Adam adjusts to life with Eve, the short tome is comprised of diary entries that detail their quotidian existence.  From the outset, Adam is not pleased with his mate:
“Monday – This new creature with the long hair is a good deal in the way.  It is always hanging around and following me about.  I don’t like this; I am not used to company.”
Over the ensuing days and weeks, Eve troubles him greatly by naming the animals, moving into his hut, and putting fish in his bed.  One would think he would not be excited about her interactions with a certain serpent, but Adam actually finds relief in her new friend: 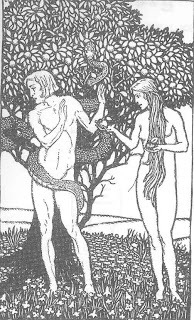 “She has taken up with a snake now.  The other animals are glad, for she was always experimenting with them and bothering them; and I am glad, because the snake talks, and this enables me to get a rest.”
Of course, after the famous apple-eating incident, all hell breaks loose and they are expelled from the Garden.  Worse, Eve starts having babies which mystify and befuddle poor Adam.
Twain submitted Extracts from Adam’s Diary for publication in the Niagara Book, a souvenir promoting the 1893 Buffalo World’s Fair.  He tweaked his copy to include Buffalo-area references, thereby locating the in .  The book would later be published as an illustrated, stand-alone piece in 1904.
After the publication of Extracts from Adam’s Diary, Sam lost his beloved daughter Susy and his wife Livy’s health began to deteriorate.  In 1902, the family moved to in an effort to rejuvenate Livy in a warmer climate.  She struggled through the ensuing two years and died in 1904.  Predictably, the loss of his wife was a desolation for Sam.  In 1905, he channeled his grief into a surprising sequel to Adam’s diary.
Eve’s Diary was created as a companion piece to the earlier Extracts from Adam’s Diary, but it is a much more mature, heartfelt piece of writing.  Whereas Adam’s scribblings evidence greater humor, Eve’s reflections on life in are much more emotional.  Where Adam is grouchy and wants to be left alone, Eve is wide-eyed with wonder, brimming with love and curiosity.  Adam is content with things being as they are, peppered with the occasional adventure (like hunting and fishing trips or a ride over in a barrel).  Eve needs to understand things, name them, conduct experiments and engage in conversation, especially with the man that shuns her at almost every turn.
In time, begrudgingly at first, Adam grows in affection for Eve.  He even seems to forgive her the lapse in judgment that precipitates their exile from .  In fact, the Fall itself (Eve’s temptation and subsequent passing of the apple to Adam) doesn’t even merit a mention in Eve’s Diary.   It  is as if Twain couldn’t bear to lay that at Eve’s feet.  She writes:
“When I look back, the Garden is a dream to me.  It was beautiful, surpassingly beautiful, enchantingly beautiful; and now it is lost, and I shall not see it anymore.”
But, she does not mourn the loss of the Garden because she has found love:
“The Garden is lost, but I have found him, and am content.  He loves me as well as he can; I love him with all the strength of my passionate nature, and this, I think, is proper to my youth and sex.  If I ask myself why I love him, I find I do not know, and do not really much care to know…”
It is clear that Twain sees Eve as the superior being – her love is unconditional; Adam’s love is qualified.  Ultimately, after forty years living together, Eve hopes for them to die together.  Her wish goes unfulfilled and the final entry of Eve’s Diary is written by her bereft husband at her grave.  One cannot help but feel that the loss of the Clemens’ home in wasn’t really the expulsion from the Garden; the greatest loss is losing the ones you love and that the true Garden lies within the border of our hearts.  To quote Adam’s eulogy for Eve:
“Wheresoever she was, there was .” 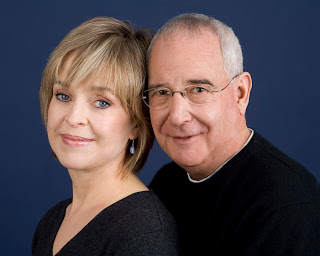 The two diaries have been integrated into one text and will be performed on Saturday, February 12th at 8 p.m. by acclaimed actors Jill Eikenberry and Michael Tucker.  Tickets for this special Valentine’s Weekend event are $50 ($40 for Museum Members) and can be ordered by calling (860) 280-3130.  Admission includes a romantic champagne and chocolate reception and book signing with Eikenberry and Tucker.
Posted by The Mark Twain House & Museum at 3:50 PM No comments: