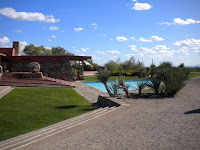 That's right, I said it. Frank Lloyd Wright and Tom Sawyer are the same person. Don't believe me? I wouldn't have believed me either until I went on a tour of Taliesin West, his winter home in Arizona. The complex is incredible; and I say complex because not only is it his home, but it is also his office, a school, work room, cabaret theatre and music pavilion. The history behind the building of Taliesin West kept my rapt attention for a 90 minute tour. He and his apprentices/students started with nothing but desert, and worked to bui 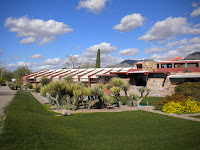 ld this "campsite". That's how Wright thought of it, as camping. Our tour guide referred to it as camping "Wright style", which is why their campsite included a pool, pianos, Wright's 30 cars (all red) and more. The buildings were built with local materials; literally rocks picked up off the ground and added into the walls. Canvas was used for ceilings (as it doesn't rain often) and windows. There was no glass (until his wife suggested it, at which point Wright said, "I have a great idea! GLASS."). The students camped out in the desert while building Taliesin West, and still do to this day. The site still maintains an architecture program where students can get a bachelors or masters in architecture. There are currently 32 students at the school, and 7-10 get accepted every year. The budget for the buildings was roughly $10,000. So, how did they manage to build all of this with that kind of a budget? I'm getting to that. 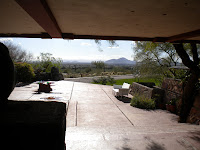 So I know you're wondering, what does this have to do with Tom Sawyer? Well I'll tell ya, every time I go on vacation there will be something Twain that I'll run into. Without fail. And yes, working at the Mark Twain House I eat, sleep, breathe and dream Mark Twain. I even bleed Mark Twain. Vacation, however, is vacation. A time to leave it all behind. So I was pretty happy when day 4 of my 7 day vacation rolled around and I was Twain-less. I thought, Arizona didn't even exist when Twain visited the Nevada Territory, I won't run into him here. And then I took this tour. Halfway through the tour we're sitting in the living room admiring the unique chairs and seating they have when a visitor asked how he managed to build all of this for so little money. The tour guide laughs and says, "Well, it was him and the students building it so he didn't have to pay for labor and the materials mostly came from the land. They used desert sand and rocks to build the walls and mix the concrete. And then, since it was his students helping him build he didn't have to pay them. Actually, they were paying him to attend this school! My visitor services manager calls him "the Tom Sawyer of Architecture". And there it was. My Mark Twain reference halfway through vacation while on tour of Frank Lloyd Wright's home. 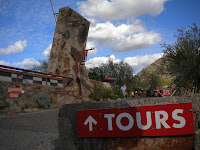 If you're ever in the Phoenix area I highly recommend taking this tour. The history, the buildings, the views... absolutely worth it.