Last Wednesday, April 21st, was the Centennial of Mark Twain's death. Around the country and in the major Twain sites there were celebrations to be had and a man to be remembered. In Elmira they re-created his funeral procession; and in Redding, Connecticut they held a wake. Here in Hartford we didn't have anything to re-create since he wasn't here at the time or after his death, so we decided to see if we could bring him back. We had a seance with famous illusionist Todd Robbins. We had some cake, and ate it too. We had a ghost tour with famed medium Lorraine Warren. But alas, no Sam.

The seance with Todd Robbins started off with our Mark Twain reading from the letter Sam sent to Harper's Weekly about obituaries and how people should write down ahead of time what they want their last words to be because at the actual time that one is dying you can't possibly think of the perfect last words. And "An obituary is a thing which cannot be so judiciously edited by any hand as by that of the subject of it. In such a work it is not the Facts that are of chief importance, but the light which the obituarist shall throw upon them, the meanings which he shall dress them in, the conclusions which he shall draw from them, and the judgements which he shall deliver upon them." (Twain, "$30k Bequest") Mr. Robbins then took the audience through some psychic tricks - creating a pendulum and moving it with their minds. Then he invited spirits into the room and speaking with the spirits called upon audience members who would know who "James" was or who had a dog named "Bandit". He then invited Twain to come into the room. The lights went out, and whispers surrounded them, whispering "The Impartial Friend: Death, the only immortal who treats us all alike, whose pity and whose peace and whose refuge are for all--the soiled and the pure, the rich and the poor, the loved and the unloved" (from Albert Bigelow Paine). Twain was speaking about death and life, and the audience was covered in rose petals and when the lights came back on they found themselves surrounded by pages from Tom Sawyer. 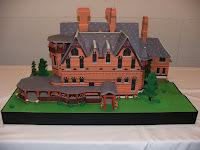 concluded the attendees came out into the Great Hall for the unveiling of the Centennial cake which was in the shape of the Mark Twain House and made by Charm City Cakes, of the Food Network show Ace of Cakes! The cake was beautiful, complete with details of the slate on the roof and flower pots by the porch. Students from the Lincoln Culinary Institute graciously came and cut the cake for us.

Once the cake was consumed the VIPs were led over to the house for a private ghost tour with Lorraine Warren (most famously known for The Amityville Horror). With Rebecca Floyd leading the way (she was on Ghost Hunters while they were here) on the ghost tour Mrs. Warren would tell stories about her own experiences inside the house. Here's a video of her inside the master bedroom talking about a time when she had entered the room and saw Sam's daughter Susy lying on the bed. Susy passed away inside the house at the age of 24 in 1896.

All in all it was a wonderful evening. Those who came had fun, remembered Twain and celebrated his live and his home here in Hartford. If you attended, feel free to leave a comment on how the program went!

"Death, the refuge, the solace, the best and kindliest and most prized friend and benefactor of the erring, the forsaken, the old and weary and broken of heart." -Mark Twain, Adam & Eve

Tom Sawyer at the Hartford Stage

Last night a bunch of the staff went to see Tom Sawyer at the Hartford Stage. I heard that it was great from others who had been during preview week. We had great seats and watched for two hours as a handful of twenty-somethings brought us back to our pre-teen years. The characters were enthusiastic and energetic and ran around the stage like we used to do as kids. They brought back the feelings we had as kids; shy around the boy/girl we liked, mischievous, thinking the best thing ever was to run around screaming our heads off.

The novel was adapted really well for the play and hit on all of the major scenes of the novel. As someone talks about Twain and Tom Sawyer I didn't feel as though anything had been left out. Throughout the play there are these little narration scenes where one of the characters will leave character and tell the audience something about what is going on. This really helps keep everyone up to speed with what is going on, seeing as they are performing an entire novel in two hours. The stage was used in some really creative ways to create more space than was naturally available. This was especially so in the cave scenes.

I tweeted throughout the whole (before, intermission and after), if you'd like to read what I was saying you can see it here: http://www.twitter.com/twainhouse. Funny enough, "Becky's" parents came to visit the museum today. They picked up the Tom Sawyer flier and I commented how wonderful the play was. The laughed a little and said thanks, that their daughter was Becky Thatcher. Later, before their tour started, I saw her mom putting in her face in the Becky Thatcher cutout in the museum center. I'm sure their daughter will love seeing that!

If you're in the Hartford area, I highly recommend going to see the play! If you've seen it already, feel free to share your comments on how you think it was below.

"In writing "Tom Sawyer" I had no idea of laying down rules for the bringing up of small families, but merely to throw out hints as to how they might bring themselves up, and the boys seemed to have caught the idea nicely." -Mark Twain

Posted by The Mark Twain House & Museum at 2:26 PM No comments:

This month's cover story of Knowledge (a BBC magazine) is yours truly - no, not me. Mark Twain. Though I don't see why they shouldn't do a story on me, but that's another story. There is a great six page spread on Twain, his influence, his writing and what he still means to us today. In this, the month of his death, Twain is gracing the cover of more than one publication. He's also featured on Hartford Magazine's cover. I haven't gotten my hands on Hartford Magazine yet, but Peter Messent, the author of the article in Knowledge sent us a copy. It's a well-written piece on Twain's life and legacy, including a time line of major events in Twain's life. At the end there is a section called "For & Against" where two scholars go head-to-head on a topic. This month's question: "Was Mark Twain America's Most Important Novelist?". In one corner for the FOR argument is Shelley Fisher Fishkin, Professor of English at Stamford Univ., Twain scholar and friend of the Twain House. In the opposite corner with the AGAINST argument, Paul Giles, Challis Professor of English at the Univ. of Sydney.

For the yes argument, Ms. Fisher Fishkin uses quotes from authors and world leaders to make her point. She quotes Ernest Hemingway with his famous line, "All modern American literature comes from one book by Mark Twain..." She also uses Nobel Laureate Kenzaburo Oe as an example, saying that HUCKLEBERRY FINN inspired him to write his first novel. Also, the term "New Deal" used by FDR came from Twain's A CONNECTICUT YANKEE IN KING ARTHUR'S COURT. She finishes saying, "Humane, sardonic, compassionate, impatient, hilarious, appalling, keenly observant and complex, Twain inspired great writers in the 20th century to become the writers they became...The generative power of the writer Eugene O'Neill called "The true father of all American literature" is unrivaled.

For the no argument, Mr Giles says that "For all of Twain's innovative aspects, did he have the encylopedic range of Herman Melville, the crystalline clarity of F Scott Fitzgerald, or the political impact of Harriet Beecher Stowe?" It seems as though Mr. Giles believes that there really can be no argument for any one writer to be given the credit of being the most important novelist. He says that in universities today, to discuss which novelist is greater than another is "absurd". He finishes by saying that "to call [Twain] the most important American novelist is like calling Chrysler the most important American automobile manufacturer: it's a sonorous statement, but not an especially meaningful one."

So now I ask you, loyal Twainiacs, for your thoughts. And so does KNOWLEDGE! If you have thoughts on this subject I encourage you to share them here but also to email them to editor@bbcknowledge.com!

"Everybody's private motto: It's better to be popular than right." -Mark Twain, Notebook, 1902
Posted by The Mark Twain House & Museum at 11:38 AM 1 comment: