Now that you're full up on your Thanksgiving feast, why not get into the holiday spirit with one of our favorite events of the year? Visit the Twain House in its holiday best, and get a unique chance to tour private homes decked out for the season as well.

The Mark Twain House is decorated with garlands and gifts, and area homes are open to your visit in a rare opportunity to savor architecture and décor usually kept behind closed doors. Visit some of the grand houses built by prominent local architects in the late 1800s, when Twain lived here, and the early 1900s; and wonder at a house filled entirely with trees. With music and festivity to go along with it, this event has been a Hartford holiday tradition for more than thirty holiday seasons. Organized to a T by our active Friends of The Mark Twain House & Museum group!
Advance tickets are $30 each and can be purchased at The Mark Twain House and from several local businesses. Tickets will be $35 each on the day of the tour and can be purchased at the homes. For more information or to purchase tickets, call 860-280-3130 or visit www.marktwainhouse.org. Proceeds from the tour will benefit the continued restoration, preservation, and education programs of The Mark Twain House, which is a National Historic Landmark.
See you there! (Or here!)

We've been loving our Steampunk Bizzare: The Unknown exhibit, but our latest exhibit just adds to the thrills of visiting our museum center. We recently installed throughout our beautiful marble building a number of puppets from the Ballard Institute and Museum of Puppetry. Guess which Twain work they refer to? 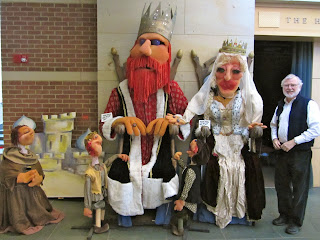 That's right-- A Connecticut Yankee in King Arthur's Court. In 1996, the Connecticut Repertory Theatre mounted a large-scale puppet production of this Twain classic. We're lucky enough to host these fellows in our museum all the way until March 5th, 2012. The puppets range from royals to ordinary folks, like pig boy and his pigs. 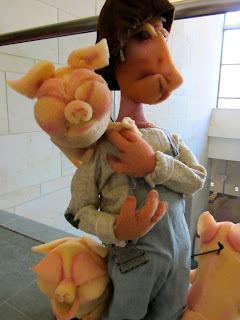 If you haven't read Connecticut Yankee (and don't feel bad, lots of people haven't-- put it on your bucket list), you might not know that it's rife with familiar characters from King Arthur's Court. Grinning knights and sassy Morgana; and once in a while, Merlin pops up. 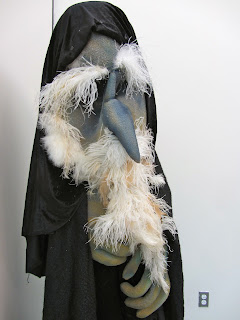 Last Saturday was our "Free Hartford Day," and so we invited the fine folks from Ballard to come and give a live presentation of how the puppets work. They also spoke a bit about the design. 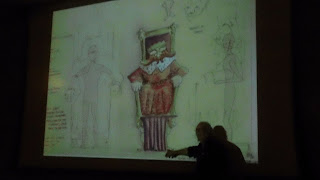 Thank you so much to the fine folks of the Ballard institute paying us a visit. Now we hope you will-- there are way too many amazing puppets to describe here! For more information on the exhibit and the museum, please visit our website. 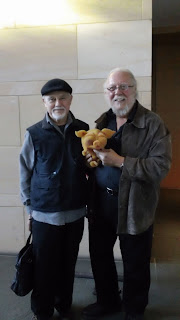 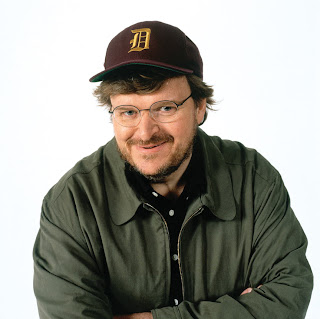 Shortly after my arrival at The Mark Twain House & Museum, I started brainstorming ideas for exciting speakers to have come to Hartford. As the Director of Communications and Special Projects, it is my responsibility to program two lecture series: The Clemens Lecture and A Pen Warmed Up in Hell Lecture. The Clemens Lecture series has brought distinguished leaders in the fields of the arts, journalism and letters including Hal Holbrook, Bob Schieffer, Morley Safer, David Baldacci, and, most recently, the legendary newsman Ted Koppel. A Pen Warmed Up in Hell is the bratty cousin of The Clemens Lecture. This series spotlights authors, artists and journalists who use their work and humor to address social issues in a provocative manner.

The title of the series comes from Twain himself. It appears in a letter written shortly after he completed his masterpiece A Connecticut Yankee in King Arthur’s Court:

"Well, my book is written--let it go. But if it were only to write over again there wouldn't be so many things left out. They burn in me; and they keep multiplying; but now they can't ever be said. And besides, they would require a library--and a pen warmed up in hell."

In time, Twain would abandon such restraint and use his pen warmed up in hell to attack war, politics, hypocrisy, religion, and more. The Pen Warmed Up in Hell Lecture series provides audiences with the opportunity to meet modern day provocateurs who work in this same manner. Past guests include Spike Lee, Henry Rollins, Kinky Friedman, Charles P. Pierce, Andy Borowitz, and Rolling Stone’s national correspondent Matt Taibbi.

To my mind, there was one man I could ask who pretty much defines the spirit of this lecture series: Michael Moore. Has any contemporary filmmaker had a larger, ongoing impact on political discourse in this country? Five of his films - Fahrenheit 9/11, Bowling for Columbine, Sicko, Capitalism: A Love Story, and Roger & Me – appear in the list of the top 25 highest-grossing documentaries of all time.

When Moore released his first film in 1989, it was greeted with the following review from Vincent Canby in The New York Times:

“A Twainlike Twist for Flint, Mich.” by VINCENT CANBY
America has an irrepressible new humorist in the tradition of Mark Twain and Artemus Ward. He is Michael Moore, the writer, producer and director of the rude and rollicking new documentary feature ''Roger and Me.'' Much in the manner of those 19th-century forebears, Mr. Moore celebrates the oddities of the American frontier, once defined by the historian F. J. Turner as 'the meeting place of savagery and civilization, where democracy is strengthened.' 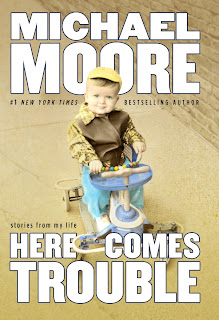 I started working on getting Moore to Hartford two years ago. We had a close call when he said “yes” at the time he was gearing up for the release of Capitalism: A Love Story. His promotional schedule ramped up and life got hectic for Mike, so he had to postpone. Subsequent attempts to schedule an appearance did not pan out, until recently. Mike emailed me out of the blue; he was book touring to support his new memoir Here Comes Trouble. Little did I know, the title of his memoir would be so apropos.

We knew that many of our valued sponsors would be leery about having Mike come here. We contacted them in advance and felt them out on the opportunity ahead of us. Without exception, they viewed the opportunity to present Michael Moore as a coup for the museum. Of course, we couldn’t expect them to sponsor his appearance, but they wouldn’t withhold their usual support for house preservation and restoration, our educational and other programmatic efforts. For their vision and generosity, we are most appreciative.

Not everyone at the museum is a Michael Moore fan. Some are quite the opposite. Same with our board. Again, without exception, they felt it was important to present him to the public.

When the announcement of Mike’s upcoming appearance hit the Hartford Courant, we received angry calls, letters, emails and comments on the Courant article. When we posted the event on our Facebook page, one MTH&M fan called him a “horrible man.” Many of the comments on the Courant page called him “un-American” and that the MTH&M was making a horrible mistake in bring Michael Moore to Connecticut. An email from a conservative fellow halfway across the United States, made sure that we were aware that he brought our betrayal to the attention of Rush Limbaugh. Many of the derisive comments surrounded Moore's looks, which is petty in the extreme and makes one wonder if the authors find the political views of supermodels more palatable. By far, we have taken more heat for this lecture than any that we have previously hosted (including Kurt Vonnegut, who let loose with his thoughts on the Iraq War only days after it began).

Have we made the wrong move in inviting someone who is so polarizing? Quite simply, Michael Moore is the epitome of our Pen Warmed Up In Hell series. You may not agree with his politics. Or you may believe he is a genius. You may think he is a hypocritical propagandist. Or you may find discomfort in his pointing out things we do not like to discuss. You may think he is a traitor who hates America. Or you may believe that he is a patriot exercising his free speech. But, ultimately, you could say many of the same things about Twain. Like Moore, Twain was no stranger to controversy.  One only need read Adventures of Huckleberry Finn.  Moore's new memoir Here Comes Trouble even mirrors the non-linear approach Twain adopted for his own autobiography.  And both men use humor to set their scorching bonfires. Sure, bonfires produce smoke and make our eyes sting, but they also provide light and much-needed heat. The perfect environment for warming up one’s own pen in hell.

We welcome Michael Moore to the University of Connecticut’s Jorgensen Center for the Performing Arts on Friday, November 18th at 7:30 p.m. Tickets are $25-$45 and can be ordered by visiting jorgensen.uconn.edu or calling (860) 486-4226.  The lecture will be followed by a book signing.
Posted by The Mark Twain House & Museum at 12:04 PM No comments: