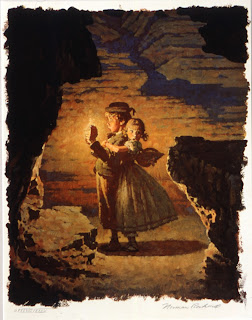 The Mark Twain House & Museum is thrilled to present American Storytellers: Norman Rockwell & Mark Twain, an expansive exhibition that features Norman Rockwell’s Tom Sawyer & Huckleberry Finn organized by the Norman Rockwell Museum in Stockbridge, MA.  The exhibition, opening March 11th and running through September 6th, also features dozens of Rockwell prints, original oils, sketches and illustrations from the collections of MassMutual Financial Group, The Mark Twain Boyhood Home & Museum in Hannibal, MO and the New Britain Museum of American Art.  MTH&M Director of Communications reflects on how Twain and Rockwell loom large on the American conscience.
In 2003, we opened our new .  One of the great assets of the new facility is the ability for us to showcase some of the thousands of items we have in our collection.  Most people are not aware of the treasure trove of books, letters, artifacts, furniture, art, and more that the museum has amassed over its 80+ years.  The building also affords us the opportunity to exhibit other work that can help us better tell the story of Twain. 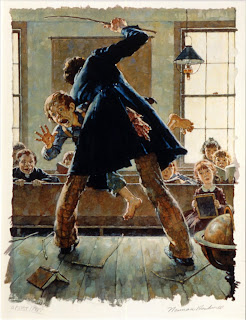 Under two hours away in Stockbridge, MA, there is another museum that is also dedicated to highlighting the work, the life and the legacy of an American icon:  Norman Rockwell.  Although Rockwell was born in 1894 (during Twain’s lifetime) and grew up in (where Twain spent many of his later years), the two men never met.  Rockwell’s first works as a professional illustrator were not published until 1912, two years after Twain’s death.  As such, they were of two different eras.  So why are Rockwell and Twain twinned in many ways in the public consciousness?
With books like The Adventures of Tom Sawyer, Adventures of Huckleberry Finn and Life on the Mississippi, Twain explored many of the seemingly carefree idylls of the typical American boy’s life.  Rockwell illustrated the cover of Boy’s Life, the magazine of the Boy Scouts of America, for several years.  Twain’s books feature adventure, over-active imaginations and afternoons spent playing hooky with friends.  Rockwell’s illustrations for The Saturday Evening Post and his advertisements for the Mass Mutual Life Insurance show the enthusiastic energy of childhood and the importance of family.   Both Rockwell and Twain’s work are suffused with humor and contain many touching moments.
Rockwell’s art and Twain’s words were and are, in essence, for the masses.  Twain stated, “My books are water: those of the great geniuses are wine.  Everybody drinks water.” (Mark Twain’s Notebook)  This somewhat self-deprecating remark could easily apply to Rockwell’s art, which was widely available via magazine covers.  Twain’s books were sold door-to-door by subscription.  Unlike the works of “great geniuses,” Twain and Rockwell’s work were readily available in everyone’s home.
Although Rockwell worked in paint, he was not referred to as a painter the way a Da Vinci or a Rembrandt would be; he was labeled “an illustrator” (a term he embraced).  Twain, similarly, was seen less as a novelist and and is more frequently labeled “a humorist.”  It is easy to forget how both Twain and Rockwell could be provocative with their work.  Some critics have dismissed their work as lightweight, blithely ignoring the important statements they made on race (Twain’s Huckleberry Finn and Rockwell’s Civil Rights-era The Problem We All Live With) and society (Twain’s writings on Imperialism and Rockwell’s iconic The Four Freedoms). 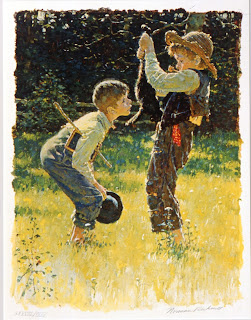 Both Rockwell and Twain have had the last laugh.  They are arguably more popular than ever: recent Rockwell exhibitions have smashed attendance records at museums across the country and Twain’s Autobiography has been firmly lodged on the New York Times Bestseller list since its release.  A critical reassessment of their oeuvres has forced scholars to rethink the weight of these two masters.    When it comes right down to it, it is no surprise that we often think of Rockwell and Twain together.  Rockwell was commissioned to create illustrations for the 1936 Heritage Press edition of The Adventures of Tom Sawyer and the 1940 Heritage Press edition of Adventures of Huckleberry Finn.  Rockwell traveled to to create his sketches, immersing himself in Twain’s world.  The artist stated, “These were classics. I read through the books, making notes of which scenes would make good pictures. Of course certain scenes—for instance, Tom whitewashing his Aunt Polly’s fence—were required.”  He went on to describe the world of Twain’s novels as, “complete and perfect to the last detail.”  We would guess that Twain would express the same sentiments toward Rockwell’s work.  We are delighted to celebrate the impact of these two icons that have become inextricably linked.
American Storytellers: Norman Rockwell & Mark Twain has been made possible by:
The City of Arts & Heritage Jobs Grant Program, Pedro Segarra, Mayor
The Edward C. and Ann T. Roberts Foundation
The Saunders Foundation
United Technologies
The George A. & Grace L. Long Foundation, Bank of & Alan S. Parker, Co-Trustees
The Greater Arts Council
The Commission on Culture & Tourism
Posted by The Mark Twain House & Museum at 4:09 PM No comments:

We know the paper books vs. e-reader (Kindles, Nooks, etc.) debate isn't a brand-new one. We at the Mark Twain House, however, are fascinated by this cultural shift, not only as an organization founded on a writer and publisher, but as a museum with a small bookstore within our walls. No matter what you think of Kindles and the like, their presence is having an unquestionable effect on the book industry.


If you are a book lover, you no doubt have noticed many announcements of stores small and large alike shutting down. Here's the latest we've heard.


The question at hand is: should we accept the descent of the paper book, and embrace the future of books-on-screen? Paper books likely will not disappear for centuries, or maybe ever, but it is possible that they might become more of a specialty item, harder to find, more expensive, for aficionados only. Or maybe, as large book chains struggle, this is the moment for independent bookstores to step back into the spotlight. Our museum bookstore sold an astounding number of copies of Twain's Autobiography, and despite the fact that Twain's works are in the public domain and on the internet, does a bang-up business selling the writer's works to visitors.


But let's take a moment, step back, and talk about the book itself. The internet has been churning out odes to the paper book (ironic!), many of which are worth sharing.


Here's an excerpt from Frenemy's: With real books, there are moments in a a doctor’s office. You watch a girl, maybe fifteen, pull out the Great Gatsby. You remember the moment you fell for it during the bare legged swing and lemonade sip of your sophomore summer. That month you soaked up the pain of love with the kind of awe and understanding that you will never be as brilliant as Fitzgerald. Or Vonnegut. You remember reading sentences from the great and the dead that throw you against a wall or rip your heart out, so you touch the pages and run your fingers down the ink in substitute. There are moments on the subway. A cute, tousled hair kind of guy pulls out a book you have never read. You watch his face, the movements of his mouth as he soaks it up and for a moment you love him. You take out your book, ruffle through your purse, find that paperback and let somebody fall in love with you as you struggle to read with one hand gripped on the crowded railing.


And here's Powell's Books Blog, which is a lively, wonderful conversation on literature. Powell's is a huge indie book store in Portland, Oregon, and if you haven't been there, try to make a pilgrimage sometime. This isn't an actual ode to books as much as it is a living breathing book-loving community.


And one from Julia's blog: I do not read while I am waiting to do other things. I do other things while I am waiting to read. As a child I used to lie on my parents’ bed to read picture books with my father; as he’d fall asleep the pages we’d already read together would flutter haphazardly in the wrong direction, and I didn’t have to turn to his face to know he had fallen asleep.


How about you? Any favorite articles or blogs about books?


And how about favorite bookstores?  Mine's McNally Jackson in New York. And of course our own bookstore. Come visit!

Last night, Dr. Kerry Driscoll led a riveting discussion on Mark Twain's latest literary sensation, the Autobiography of Mark Twain, Volume 1.  Our museum center was packed with first-time Nook Farm Book Club members, as well as loyal returnees, and of course, the staffs of the Twain House and the Harriet Beecher Stowe Center. In our hour together, we meandered through so many rich topics that I thought I'd put them into discussion-question form for your own book reading pleasure. Enjoy! No spoilers!

1. Mark Twain, in his story "Sociable Jimmy," described a character as "an inexhaustable talker." The same could be said for Twain himself! How do you feel about his rambiling, casual (almost chatty) style?

2. Twain undertook the dictation of this book as an experiment-- to see if he could blow apart the traditional autobiographical structure. At the same time, cubism and other artistic experimentations were on rise. What do you think the relationship was between these artistic forms? Do you think this particular bold experiment was a success?

3. Twain doesn't seem too concerned with his reader's ability to follow along with the narrative. Who do you think he was writing this book for? Did you, as a reader, feel that you were being positively challenged, or cheated out of a traditional story?

4. Since Twain abandoned chronology, did you feel free to do the same? Did you read the book in a linear fashion or did you skip around?

5. There are some beautiful passages in this work- for example, the description of narrative moving along like a stream (on page 224 of the University of California Press version). Which passages did you find most interesting or moving?

6. Many people in our discussion group felt that Twain had a manic/depressive quality about him. While it is impossible to diagnose someone 100 years after his death-- what do you think? Does his memoir exhibit a range of attention or emotion that you found surprising or remarkable?

7. One of Twain's motivations for delaying the publication of this autobiography was to air his grievances against politicians and acquaintances he didn't much like. We were particularly impressed with the vitriolic takedown of the Countess Massiglia. Any favorite smackdowns? Is it fair to take down enemies 100 years in the future, or is all fair in love, war, and autobiography?

8. One of the most amazing things about this autobiography is the fact that it was entirely dictated. Mark Twain has accomplished a rare and remarkable feat- being both a great writer and a great speaker. How do you think his conversational tone has affected his writing style, and vice versa?

9. For historians and history lovers, this book is a treasure trove of information. Any details you found enlightening or just plan interesting? Did the book give you a sense of everyday life in that time period?

10. Finally-- this book still manages to be downright hilarious. Read aloud your favorite funny passages, and marvel in the genius of humor that lasts over 100 years.

-- Julia Pistell
Communications & Membership Associate
Posted by The Mark Twain House & Museum at 11:08 AM No comments: