AIG (American International Group) has been in the news a lot lately, so it's not surprising that AIG showed up in the New York Times this past Tuesday. This time, it was a little different. An executive vice president of the financial products unit of AIG sent his resignation letter to the New York Times to be published. Jake DeSantis decided to publicly resign from AIG, stating that he was ashamed of the company for what is currently happening but proud of the work he had done. DeSantis received a bonus check for $742,000 from the company eight days before he resigned. In his resignation letter he states that if he is allowed to keep the money, he plans to donate the entire amount and will publish the recipients once he has done so.

How does this story connect to Mark Twain? Well, DeSantis currently lives in Redding, CT on the same property that Sam Clemens lived on at the end of his life. The piece written by the Connecticut Post describes DeSantis and his wife as "generous people with a lot of heart." The director of the Mark Twain Library (which donations from Clemens helped found, as well as a collection of his books) said that DeSantis has been a great friend of the library since moving there.

"In all the ages, three-fourths of the support of the great charities has been conscience money." - Mark Twain

Posted by The Mark Twain House & Museum at 11:55 AM No comments:

Craig Hotchkiss, the Education Department Program Manager here at the Twain House has taken his show on the road! Along with Sonya Green, the Program Coordinator at the Harriet Beecher Stowe Center, the educational program Twain & Stowe: Effecting Social Change has branched out into libraries around Connecticut. Mark Twain and Harriet Beecher Stowe lived next door to each other here in Hartford, and both made a major impact on their worlds with their literature. The program, which takes a deeper look into the societal effects of Adventures of Huckleberry Finn and Uncle Tom's Cabin has quickly become a popular option for high school field trips. Students and tea 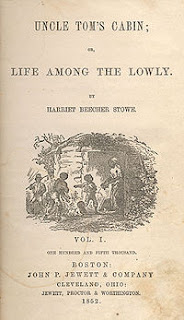 chers learn and come understand and appreciate how these small books had such a profound influence on race relations in the United States over the past 150 years, and why they continue to have relevance to our cross-cultural dialog even today. Libraries around Connecticut have now become interested in having this program done on their sites! Craig and Sonya have visited Goshen, Guilford and Derby; and are booked for Litchfield, Trumbull, Southbridge, Rockville and the New England Librarian Association convention in October!

Don't miss out on being able to have this interesting and informative program at your school or library! Call Craig Hotchkiss for details or to book the program! (860) 280-3146

"The self taught man seldom knows anything accurately, and he does not know a tenth as much as he could have known if he had worked under teachers, and besides, he brags, and is the means of fooling other thoughtless people into going and doing as he himself has done." -Mark Twain
Posted by The Mark Twain House & Museum at 1:28 PM 1 comment:

There is currently a petition going around to make 2010: The Year of Mark Twain. 2010 is the centennial of Mark Twain's death and Twain sites around the country will be honoring him with events and celebrations throughout the year. By the 262 signatures already on the petition it's clear from their comments that Mark Twain had made a significant impact, and should be honored nationally.

Just a couple of weeks ago, Senator Christopher Dodd from Connecticut introduced the Mark Twain Commemorative Coin Act. This act, which would mint 100,000 five-dollar gold coins and 500,000 silver dollar coins, would benefit the Mark Twain sites around the country. The sites benefiting would be The Mark Twain House & Museum here in Hartford, CT; the Mark Twain Boyhood Home and Museum in Hannibal, MO; and the sites in Elmira, NY and Berkeley, CA. The coins would go on sale in 2013, for a price that is yet to be determined. Potentially, if all goes as Sen. Dodd plans, each site would benefit tremendously from this project. Of the $35/$10 surcharges added to the prices of the $5/$1 coins, respectively, we would see 2/5 of those surcharges. The Mark Twain Project in Berkeley, CA, The Center for Mark Twain Studies in Elmira, NY and The Mark Twain Boyhood Home & Museum in Hannibal, MO would each see 1/5. This one year project would help to ensure that Mark Twain sites around the country would be able to continue to promote and educate visitors about Mark Twain for years to come.

IMPORTANT FACT! This project won't cost you a dime! Unless of course, you'd like to spend your dimes to buy a coin. All costs will be covered by the sale of the coins. So if you're thinking, "Golly, I'd really love to own a Mark Twain Commemorative Coin!" contact your local Senator or Representative and tell them to support the bill!

The Numismatic News (The Complete Information Source for Coin Collectors) published an article about it yesterday, as well as the Hannibal Courier-Post.

"Some years ago on the gold coins we used to trust in God. It think it was in 1863 that some genious suggested that it be put on the gold and silver coins which circulated among the rich. They didn't put it on the nickels and coppers because they didn't think the poor folks had any trust in God....If I remember rightly, the President required or ordered the romoval of that sentence from the coins. Well, I didn't see that the statement ought to remain there. It wasn't true. But I think it would better read, "Within certain judicious limitations we trust in God," and if there isn't enough room on the coin for this, why enlarge the coin." -Mark Twain

Posted by The Mark Twain House & Museum at 11:11 AM No comments: