"I AM NOT AN AMERICAN; I AM THE AMERICAN."

With Independence Day upon us, Mark Twain House & Museum Director of Communications Jacques Lamarre questions whether or not Mark Twain was “the American.” 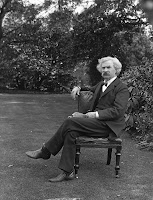 The quote “I am not an American; I am the American” has been popularly misattributed to Mark Twain. It even trips up the most astute Twainiacs. Ken Burns uses the quote in the superlative documentary that we show in our museum center and on the cover of the soundtrack and DVD of his full Twain miniseries. Twain did write the phrase in a notebook that he took with him on his European travels in 1897, but he was, in fact, quoting his friend Frank Fuller. Over time, the quote has become more and more synonymous with Twain, and that is not really surprising. For many of us, Mark Twain is the quintessential American. A bigger question might be: how American was he? By a lot of modern measures of patriotism, Twain could be called downright un-American.


With all this stacked against him, how could Twain be considered “the American?” Precisely because he enjoyed the freedoms that America provides. He used our freedom of speech to question our leaders, mock hypocrisy and praise those he deemed worthy of praise. He used the freedom of the press to tell the truth, stretch the truth and create his own truth. He created the embodiment of American childhood with The Adventures of Tom Sawyer. He exposed our institutionalized racism that denied rights to African Americans in Adventures of Huckleberry Finn and The Tragedy of Pudd’nhead Wilson. He was a Capitalist who started his own businesses and earned his own wealth. Twain also, like many Americans, faced debt and imminent foreclosure. He voted his conscience and used his freedom of religion to pursue his own path toward understanding and challenging the Immortal. He embraced the American ability to invent yourself. How else would a Samuel Clemens become a Mark Twain? Of course, he was born in America, but he also represented America across the globe.  In turn, he brought the world back to American shores through his travel writing, helping us become global citizens. He became an internationally-renowned celebrity, something American culture craves.  And finally, his books engendered all of the liberties that we hold dear – books that are widely read in countries where those freedoms are denied. As such, maybe Mark Twain is “the American.” Even if he didn’t say so.
Posted by The Mark Twain House & Museum at 11:45 AM

Although I've read many of his books, I really don't know much about the man. Your site has proven very educational, and inspired me to keep my eyes open for Mark Twain biographies.

I first saw this fabulous photograph I'd not seen before when it appeared on Tumblr. This led me here in my effort to determine its provenance. I always try to apply proper accreditation even to public domain works, so I would appreciate it if you can tell me the name of the photographer if its known?