Judy Blume will be speaking at the University of Hartford on June 21st as a fundraiser for The Mark Twain House & Museum. Our Communications Associate, Julia, will be interviewing her onstage and taking tons of audience questions. In preparation, I will be reading her complete works and blogging about the experience. Get your tickets here.


Julia has been reading the complete works of Judy Blume in her spare time, and blogging about each installment over at her blog.


Here's a bit of what she had to say about Are You There God? It's Me, Margaret:


"If you haven’t read it, Are You There God, It’s Me, Margaret encompasses one sixth-grade year in the lives of Margaret, Nancy, Jane, and Gretchen. In its pages it contains a huge amount of little moments that ring true to any twelve-year-old-girl, such as:
“My mother went to the counter and told the saleslady we were interested in a bra. I stood back and pretended not to know a thing. I even bent down to scratch a new mosquito bite.” 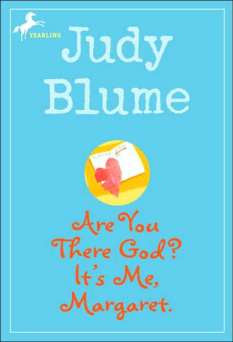 Yup. That was me, every time my mom took me anywhere that was deeply important to me. Moms. How do they always know what to do, even when we’re completely silent on the matter?
But despite the popular fact that this book directly addresses the anxieties girls have around periods, bras, boob development (we must, we must, we must increase our bust), seven minutes in heaven (I’m suddenly wondering if the continued prevalence of this game is entirely due to the prevalence of this book), the complex world of female friendship, and boys in general, the real subject of this little novel is religion.
Margaret is half-Jewish and half-Christian, but since religion detroyed her parents’ relationships with their families, she is raised as “No religion.” (Her words.) She prays– see the title– conversationally, asking for no one to find out she’s put six cotton balls in her training bra. She embarks on a quest, a school project to find out what church and temple are really like, and she talks to God about these things with a sincere directness that rang true to me, and, I suspect, to a lot of other young girls.
Are you there God? It’s me, Margaret. I just came home from church. I loved the choir– the songs were so beautiful. Still, I didn’t really feel you God. I’m more confused than ever. I’m trying hard to understand but I wish you’d help me a little. If only you could give me a hint God. Which religion should I be? Sometimes I wish I’d been born one way or the other. 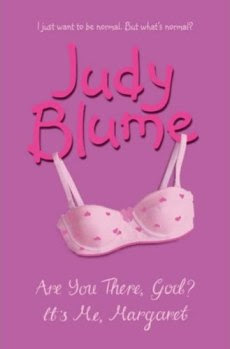 Her parents and grandparents, as in all Judy Blume books, are drawn carefully and with complexity. They have adult conversations right over Margaret’s head, with some lines I’m sure I did not understand when I was ten:
(Margaret’s father, raised Jewish, angrily explaining why his wife’s Christian parents suddenly want to visit after a decade of estrangement:) “They want to see Margaret! To make sure she doesn’t have horns!”
Margaret thinks, during another adult conversation: “I didn’t want to listen anymore. How could they talk that way in front of me! Didn’t they know I was a real person– with feelings of my own!”
Judy Blume is the first author whose name I remember knowing. These books were written by a person who had given them quite a lot of thought. She had a lot of answers, Judy did, and she wasn’t afraid to ask a lot of questions without answering them.
It’s easy to talk about puberty– or religion– or friendship– or love– or school– to just about any woman you are close to. It’s easy to think about these things, and how they affect our lives, one at a time. But we often forget as adults, when the years start to run together and our resolutions are singular and often small (“this year I’m going to lose twenty pounds,” or “this year I’m going to get a promotion”), that when you’re twelve, everything happens at once. You move to a new town and your body changes, your friends change, your religion is called into question, you start kissing people, your grandparents and 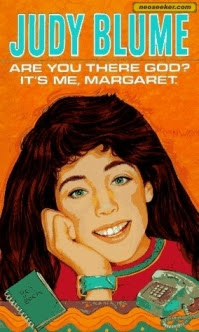 your parents have all sorts of expectations of you. Every school year, you remake yourself, willingly or unwillingly.
Nothing really happens in this book. There is no divorce, no drama, no death, no magic, no breakups. But it doesn’t need them. For a twelve-year-old girl, just living through the year is a story all its own."

Our Communications Associate, Julia Pistell, is moderating the Judy Blume Clemens Lecture on June 21st at the University of Hartford. To prepare, she's decided to do a complete read-a-thon of Judy's work. See her reasons below and follow her progress daily over at her blog.

During Banned Book Week last fall, my coworker Mallory and I got to talking about our favorite censored authors. There are, of course, the high-profile scandals– Salman Rushdie, J.D. Salinger, and of course, my employer, Mark Twain. Lots of people are also aware the Harry Potter series has been widely banned for promoting an evil lifestyle (wizardry is so insidious, isn’t it?).
Major fans of Banned Book Week, however, know that the big stars of the censorship discussion are children’s book authors. If only I could tell Madeline L’Engle, who died in 2007, what a profound effect her strange books about physics and faith had on me. If only I could tell Dr. Suess, who died in 1991, how much of my moral compass was formed by the boldness of his work. If only I could tell Shel Silverstein, who died in 1999, how fabulous his bizarreness was, and how it opened a lot of dark and awesome avenues in my young brain. If only I could tell Judy Blume…
Oh, wait. I could. Judy Blume is alive and well and actively speaking against censorship at every chance she gets. (See my post about heroes a while back– I think I finally have an answer.)
So I decided I would tell her. She’s very active on twitter– she tweeted eight times on Thursday, talking to her fans, talking about how much she, too, loved Beverly Cleary (also still alive), telling us what she’s writing, and chatting about the hilariousness of spray on makeup. She’s great. She always was, and she still is.
So I wrote Judy Blume an email asking her to come and visit us at the Mark Twain House. As I was writing it, I began to get very emotional. I realized that because of Judy (and all the aforementioned authors, as well as several more), I loved to read from a very early age. And because I loved to read I loved to write. And because of both of those things, I have this blog, I have this podcast, I have a BA in Literature and an MFA in Writing, and I work at Mark Twain’s house.
I said all this in a weepy yet, I must assume, professional email. We send these sorts of requests out all the time– at least twice a week. The response rate is perhaps 2%.
But Judy responded. Responded saying she wanted to come. As my coworkers can describe, I melted away with joy and have been overjoyed ever since. It was a secret for a long time, that Judy was coming, and now it’s been announced, and every time I tell a person between the ages of twenty and forty-five, they too melt away. We will sell many tickets to our Judy Blume moderated discussion. But it gets better.
I’m the moderator.
Judy and I, hanging out on stage, talking about books and writing and censorship and Twain and who knows what else. I can’t wait. It’s going to be on June 21st and you can find out more event information here.
So, in order to prepare, I’m going to be reading the entire collected works of Judy Blume. I already have them all (there may or may not have been a buying spree online moments after finding out I was moderating). The best part is: I’ll be writing a little blog piece about each and every one, mulling them over and coming up with my discussion questions. And you, dear readers, can help me, if you’d like.
If you’re not familiar with her writing, I promise you it is worth an academic look. It’s incredible to think about the sheer number of children’s anxieties and problems that she wrote about. (This is why she was banned.)
I can’t wait. I hope you can’t either. Keep a look out for the “Blume-a-thon” tags in my posts. And see you on June 21st.