After 11 years at the Litchfield Inn, the Young Writers Competition Awards Ceremony has moved to The Mark Twain House & Museum! This competition, which highlights works of poetry and prose submitted by teenagers from throughout the state, this year inspired the participation of over 580 students this year -- the third highest number of entries in the competition's 12 years -- and is sponsored by IMPAC and the Connecticut State University System. The ceremony will be held on Sunday, May 31, 2009, beginning at 7 p.m., following a reception that begins at 5:30 p.m.

"There could not be a better setting to honor outstanding young writers than the Mark Twain House & Museum. The talent and creativity of a new generation of Connecticut writers is clearly evident, and the inspiration that Mark Twain's example provides is especially fitting as we recognize their excellent prose and poetry," said David G. Carter, chancellor of the Connecticut State University System.

"These students certainly understand what Mark Twain was saying in 1888. The Mark Twain House &Museum is honored to host the 12th Annual Young Writers Award Ceremony. Hartford's Nook Farm was a haven for 19th century writers, including Harriet Beecher Stowe, Charles Dudley Warner, and, of course, Mark Twain. I can not think of a more fitting location in Connecticut for this prestigious awards ceremony," said Jeffrey L. Nichols, executive director of The Mark Twain House & Museum.

The state winners in prose and poetry, to be announced at the Mark Twain House ceremony, will be invited, with a parent, to a week of festivities in Ireland connected with the International IMPAC Dublin Literary Award and the Dublin Writers Festival. There, they will also meet young writers from Europe and Asia. Their works will also be considered for publication in Connecticut Review, the literary journal published by the Connecticut State University System (CSUS).

Posted by The Mark Twain House & Museum at 12:10 PM No comments: 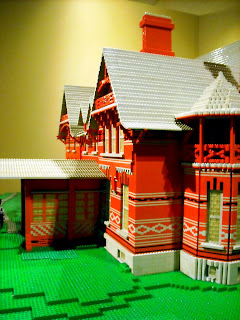 We all remember LEGO from our childhood. Well, at least I do. Being able to build houses and cars and then take them apart and do it all over again! Well, there's one house that was built that will not be taken apart. The LEGO Mark Twain House now resides on our site! The LEGO house was built back in the 1980s and had been traveling the country - until now! We are proudly displaying the LEGO MTH in our new exhibit space; Stories by the Fireside: A Readers' Room. The room boasts not only the LEGO MTH but also a cozy sitting area where visitors can watch footage of Clemens walking around his home from Stormfield; home video of Sam's granddaughter, Nina; Hal Holbrook doing Mark Twain and a 1974 Bob Steele short film where he "meets Mark Twain." The room also has a sitting area for kids, with coloring books and word puzzles and artwork done by local visiting schools! There is also a section on Sam's daughter Jean. 2009 is the centennial of Jean's death, and we've put together a small collection of artifacts about Jean. Don't miss this great exhibition!

"To us our house was not unsentient matter--it had a heart & a soul & eyes to see us with, & approvals & solicitudes & deep sympathies; it was of us, & we were in its confidence, & lived in its grace & in the peace of its benediction. We never came home from an absence that its face did not light up & speak out its eloquent welcome--& we could not enter it unmoved." -Mark Twain

Posted by The Mark Twain House & Museum at 11:56 AM No comments:

Bill Cosby has been named the most recent honoree for the Mark Twain Prize for American Humor! The Mark Twain Prize is considered the top prize for comedy in the country. The first honoree, Richard Pryor, was in 1998. Bill Cosby is probably best known for his work in The Cosby Show, but he's also known for being outspoken on many subjects, including vulgarity and race. Mark Twain probably (definitely) wouldn't have been on the same page with him on vulgarity but they would have been able to agree on the topic of race. While the two are decades apart, they have spoken out on many similar issues. In a Washington Times article, Cosby talks about the influence Twain has had on him, saying that stories like "How to Tell a Story" and "The Mysterious Stranger" have influenced his work and that when he was younger, his mother used to read Tom Sawyer and Huckleberry Finn to him. "I would like to apologize to Mr. Twain for falling asleep hundreds of times, but he should understand that I was only four."

"The humorous story is told gravely; the teller does his best to conceal the fact that he even dimly suspects that there is anything funny about it." - Mark Twain, "How to Tell a Story"
Posted by The Mark Twain House & Museum at 1:35 PM No comments: